The Patriots Voice • May 2, 2022 • https://vmhspatriotsvoice.org/661/news/chasingthecrown/

Seniors crown the royalty of the evening and dance the night away. 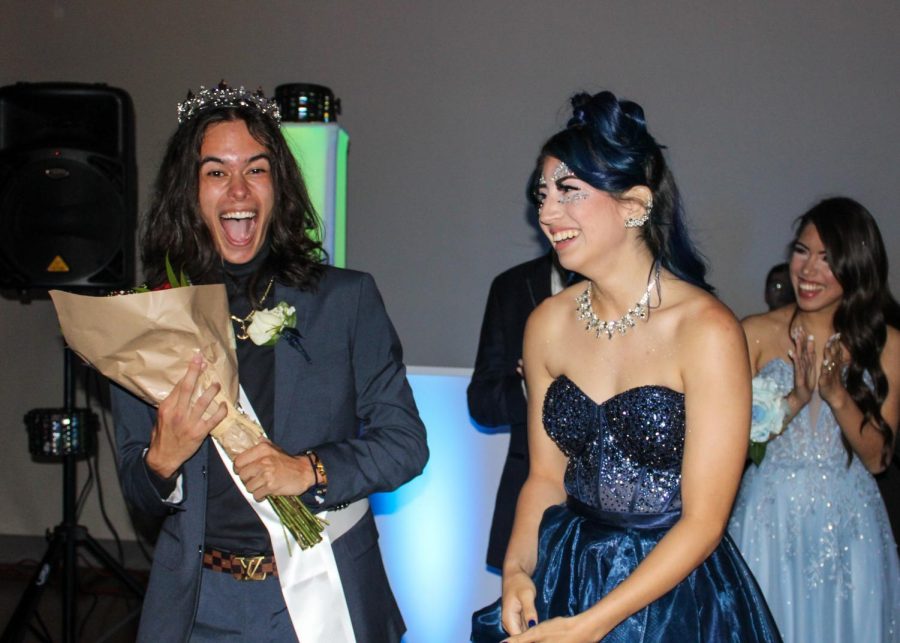 Drew Collier, senior, cheers for Izabel DeLeon, senior, when she was announced as the 2022 prom queen.

Drew Collier and Izabel DeLeon were named this year’s prom king and queen at the Veterans Memorial High School 2022 prom held at Bella on the Vine on April 23. Collier and DeLeon campaigned the week leading up to the announcement of their win, with the twist being that both winners ran with different candidates.

“It was a very humbling feeling to have and to think of all those who voted for me,” DeLeon says. “I never thought I would be someone who can win a title. To be given one was one of the most special things that could happen to me! It’s a relief to know that I had my high school experience doing extracurriculars and leaving my mark in places.”

Past the lights, past the music, past the glam and the shimmer, there is always more ahead. “After high school, I’ll be running a clothing company I co-founded with Oscar Carrera called DCSA,” Collier said about his future plans. “It’ll be a vintage-style brand, which we hope to grow into a full-fledged icon in the streetwear scene. While working on that, I’ll be doing Alamo Promise, then transferring to UT where I plan to further my singing career and major in computer science with a minor in cyber security.”

Traditionally, prom represents a special night for seniors. The class of 2023 hosted this year’s event as a send-off celebration for the class of 2022. “I think this year was the most successful year out of the past couple of proms,” says Laura Guerra, junior class sponsor. Guerra said it was a lovely evening, but “of course, there is always room for improvement.”  Plans are already in the works for next year and the sky’s the limit.