The Patriots Voice • May 11, 2022 • https://vmhspatriotsvoice.org/681/entertainment/under-the-sea-is-on-the-stage/

‘Under the Sea’ is on the stage 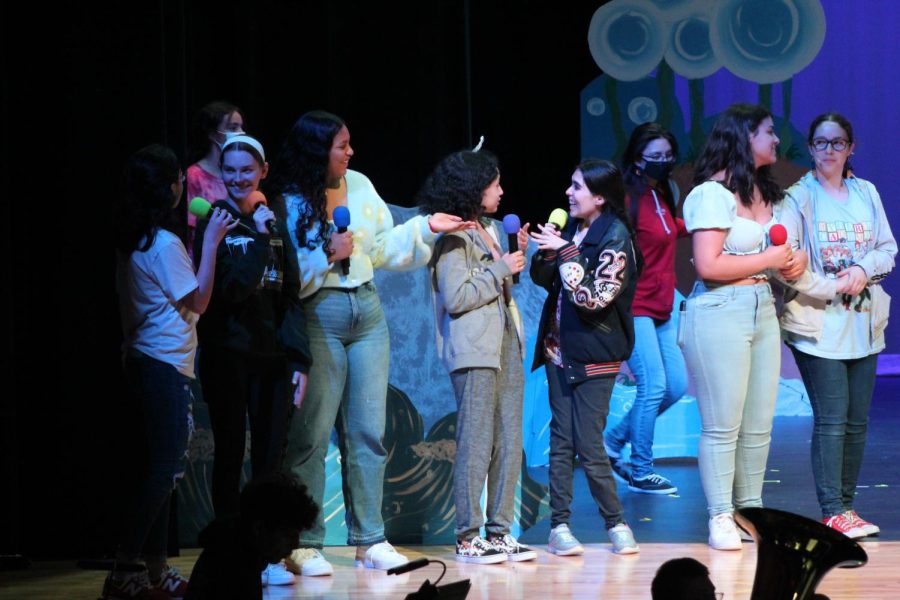 If you’re looking for a great time and like musicals, plays, and mermaids, see the VMHS Fine Arts department presentation of The Little Mermaid.  The play opens on May 12 and runs through May 14 at the VMHS auditorium. The curtain opens for evening performances at 7:00 pm, with an afternoon performance on May 14 at 2:00 pm. Tickets are on sale for $10 during lunches starting Monday, May 9. Tickets will be $10 at the door as well.

The Little Mermaid is different from other plays produced at VMHS. The play is a collaborative effort involving all the VMHS Fine Arts, including Theater, Choir, Band, Dance, Cosmetology, and Art. There are three directors. The head director is Rodrigo Mireles, the technical theater director. The other directors are Stanley Moody, the choir director and Jeremiah Brunney, the band director. Each fine-art section has its own contribution to the play. Nana-Yvette Butler, the cosmetology teacher, has her kids creating wigs for the play and doing makeup. Moody worked with the singers in the play and the music arrangement. Brunney’s band members provide instrumental accompaniment. Barbra Brunney, the dance coach, choreographed the dances and Ms. Gutierrez, the art teacher, created art, paintings and costumes.

Though similar to the movie, it has more scenes and songs, including fan favorites like “Part Of Your World” and” Under The Sea” The costumes are similar to the movie but unique in their own way. Senior Annika Martinez portrays Princess Ariel, while senior Joshua Monjarez takes on the role of Prince Eric. Senior Sofia Flores is eight-legged Ursula and sophomore Samuel Sutton is the little red mermaid side-kick, Sebastian.

The idea and process to produce this musical started last year when the three directors, Mireles, Brunney and Moody, came together and began planning and fundraisers to raise money for the play.

“It’s been fun because there’s a different energy to teaching the show collaboratively,” Mireles said. His favorite thing about the play is “watching the students involved and witnessing the magic of everything coming together. It’s magic when everything clicks”. They chose The Little Mermaid because it has a big cast and could get more kids involved. It also has many parts, songs, and dances people know.

There were significant challenges in producing this play; nothing like this has ever been done on this campus and getting the cast and crew to understand the higher learning of performance that they haven’t done before. “The goal of bringing The Little Mermaid to VMHS is to show that the school has strong fine arts departments,” Mireles explained. “And to inspire and inform kids about fine arts and encourage them to get involved.” The directors hope that people see this show and will like it and say it was a good show.

Judson ISD’s own Dr. Jeanette Ball,  Judson ISD superintendent, and VMHS’s own Dr. Sue Arredondo, VMHS principal, have accepted cameo roles, so be on the lookout for familiar faces.